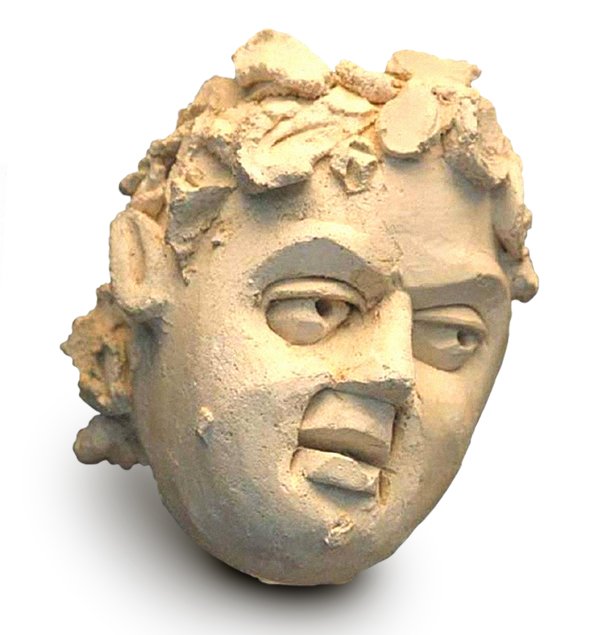 The head shown here was originally part of plaster moldings placed about two-thirds up the wall in the sumptuously decorated rooms of a private house at Palmyra. It was found with a number of similar heads originally were positioned on the top part of a horizontal relief molding. The plain part of the molding was plastered on the walls, and the heads were pressed into it while it was still wet. Several details were executed afterward. For example, a hair  just before the plaster dried completely. There are similar decorations to this techniques in Pompeian wall paintings.

Iconographically, we can only partly determine the motifs. Some of these figures are clearly theater masks, characterized by their wide-open mouths and eyes. Perhaps No 202 is supposed to be the Trojan King Prian because of his peaked cap. The head of the youth with a similar cap (No.201) may be a representation of Paris. The young girl wearing a scarf (No 200) is obviously from the realm of comedies. The series from the Hotel Meridien site is of much better quality than others from Palmyra and elsewhere in the Roman empire. (2)

Not every record you will find here is complete. More information is available for some works than for others, and some entries have been updated more recently. Records are frequently reviewed and revised. We welcome any additional information you might have on any specific item listed in this project.