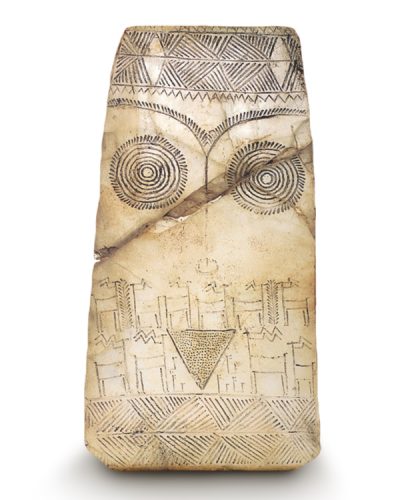 The chief archaeologist at Mari believes that this was a small stela used in the practice of a cult. On one side it is decorated with a face-like design, with two large circular eyes and the suggestion of a nose. In the place where the mouth should be, there is a female pubes, represented as a schematic triangle, while stylized birds and ibex are incised above and on either side. The presence of ibex near the female sexual organs might be interpreted as expressing an association between the masculine and the feminine. The eyes are reminiscent of those on the “eye idols” of Tell Brak. This stela is thought to be a little older than the rest of the objects in the deposit. No other object like it has ever been found in Eastern archaeology. It might have represented an all-seeing divinity or may have simply expressed the awe felt by humans in the presence of the divine and the sacred.

When a vessel or idol was no longer used in the ceremonies of a cult, it could not be thrown away as rubbish the way ordinary household utensils were. Instead, a pit was dug and the cult-related objects were buried in it. Such a pit, known as a favissa, was discovered in Mari in 1997, under the altar of a temple dedicated to a Sumerian mother goddess named Ninhursag. The excavators considered that this favissa was a sort of foundation deposit, buried beneath a temple to mark its rebuilding. This seems probable, since the cult-related installations at the temple of Ninhursag have been dated to about 2300 BC, while the shapes of the ceremonial vessels in the deposit indicates that they date from around 3000 BC. In all, some 50 objects have been unearthed in this trench.

Cylinder Seal with a Presentation Scene , with the goddess is seated on top of a mountain receiving a group of secondary gods. (Walters Art Museum – 1941)

Ninhursag was commonly depicted seated upon or near mountains, (*) her hair sometimes in an omega shape and at times wearing a horned head-dress and tiered skirt. In a rectangular framed plaque from pre-Sargonic Girsu, the goddess seated upon “scale like” mountains is determined to be Ninhursag. (*)  Here she wears a crown that is more flat without horns, and has hair in an omega like shape. In another depiction, she is seated upon mountains and also has a mountain on her horned crown.  Here she wears a tiered robe. She was identified as the female figure standing behind her son Ninurta on a fragment of the Stele of the Vultures.

Another symbol of hers was Deer, both male and female. Studies on a plaque from Mari have identified the stone as being a representation of her. The stone likely represents both a face and the naked female form. A notable feature of the plaque is the area below the ‘nose area’ where ten stags stand eating plants on opposite sides of the face. There is another group of five animals under the nose, which are suspected to be birds. In a frieze recovered from the same Mari temple, two stags flank an Igmud-eagle, the symbol of her son Ninurta.There are a number of other images with this eagle as well (such as the vase in the gallery below), where deer, ibexes or gazelles are present to represent Ninhursag (*)